In our frenetic world of 24/7, cell phones, i-pads, blackberries and other various technological gadgets, it may seem like there is not enough time to breathe, eat or sleep, much less find time to meditate.

Well, you may want to start making a conscious effort to FIND that time to quiet your mind after reading the intriguing new research which shows that practicing Mindfulness Based Stress Reduction (MBSR) can literally change your brain… for the better, of course! 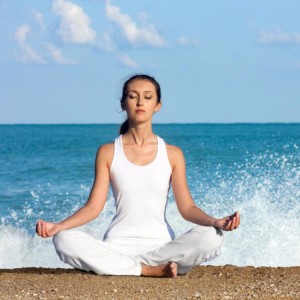 This study was led by a team of researchers at Massachusetts General Hospital ( MGH) and is the first to document meditation-produced changes over time in the brain’s gray matter (1). Gray matter refers to the nerve cells, or neurons, in the brain. White matter in the brain refers to the myelinated nerve fibers that transmit information in the brain.

What is Mindfulness-Based Stress Reduction?
The mindfulness stress reduction program was developed by Jon Kabat-Zinn in 1979 at the Stress Reduction Clinic at the University of Massachusetts Medical School (2). This program has been on the cutting edge of mind/body integrative medicine for over 30 years and incorporates elements of relaxation, meditation and mindfulness, which refers to moment-to-moment non-judgmental awareness.

Previously published evaluations of the medical outcomes resulting from patient participation in mindfulness meditation have shown a 35% reduction in the number of medical symptoms and 40% reductions in psychological symptoms (3,4).

What did previous studies show?
Previous studies have shown structural differences between brains of experienced meditation practitioners and individuals with no history of meditation, observing thickening of the cerebral cortex in areas associated with attention and emotional integration. (5) Yet in these studies, the investigators were not able to document that these changes were actually due to the meditation practices.

Can the brain really change?
In this recent and remarkable study, changes in certain brain areas were measured before and after participating in an 8-week MBSR program. Specifically, brain gray matter (brain cells) concentration was measured in 16 healthy, meditation-naïve participants using anatomical magnetic resonance (MR) images. Brain scans were performed two weeks before and after the participants had undergone the 8-week program. In addition to weekly meetings that included practice of mindfulness meditation – which focuses on nonjudgmental awareness of sensations, feelings and state of mind – participants received audio recordings for guided meditation practice and were asked to record the amount of time they practiced each day. A set of MR brain images were also taken of a control group on non-meditators over a similar time frame.

On average, meditation group participants reported spending an average of 27 minutes each day practicing mindfulness exercises. Participants reported significant improvements in reduction of stress, and this was correlated with a physiological change in a corresponding brain region the amygdala, which plays an important role in anxiety and stress. MR images of MBSR participants showed decreased gray matter density in the amydala coinciding with decreased sense of stress.

According to Britta Holzel, Ph.D., first author and research fellow at Massachusetts General Hospital, “It is fascinating to see the brain’s plasticity and that by practicing meditation, we can play an active role in changing the brain and can increase our well-being and quality of life.”

This new area of research, known as “neural plasticity” is getting lots of press these days. For many years, researchers in the field of brain structure believed that brain was immutable. That is, once formed, very little structural change could occur. Now this thinking has been turned upside down! We actually are able to change our brains by the way we think, meditate and breathe.

Now, this might knock your socks off – I am actually enrolled in a MBSR right now! My office staff is grateful and claim that I am much calmer since beginning the program. My tennis teammates are happy because I am more mindful and focused on the court and my mind/body is thanking me for taking the time to breathe! And, maybe I might just be a little smarter…