This is the latest “headline” to take the wine-drinking world by storm. However, the jury is still out on the science behind the effects of red wine and brain function. Where the scientific headlines stem from is the studies relating to Resveratrol – a group of compounds known as polyphenols that are found in the red grape skin, but also in raspberries, & dark chocolate. Studies have shown that Resveratrol can help protect nerve cells from damage and fight plaque build-up, as well as fight neurodegenerative disease progression. In highly concentrated doses, cognitive function improved in studies performed at UCLA and Georgetown University Medical Center. “The largest nationwide clinical trial to study high-dose Resveratrol long-term in people with mild to moderate Alzheimer’s disease found that a biomarker that declines when the disease progresses was stabilized in people who took the purified form of Resveratrol.” Source

Before you get too excited, watch CNN’s Dr. Sanjay Gupta

I, like many of you, love my wine. When the study and headlines first came out, I thought to myself, “Great! I have even more reason to indulge in a glass of my favorite merlot!” But after more research, to match the quantities of Resveratrol found in the Georgetown study (1,000mg x 2 doses per day), you would have to drink 1,000 bottles of wine per day. But remember, there are other health considerations when drinking a glass of red wine that cumulatively has a positive impact on the development of dementia.

Even Though the Jury is Out, The Psychology is “In”

Recently, I accompanied my mom and her caretaker, Rosa, on a Wine Walk in beautiful Mammoth Lakes, California. As many of you know, my mother is suffering from dementia and is rapidly declining. The event was a blast and my mom really enjoyed tasting the various wines from wineries in California and Oregon. Even though the studies all say that red wine cannot produce any regenerative effects, the psychological impact for my mother being at the wine walk, tasting wines, enjoying the outdoors, laughing and smiling is undeniable. 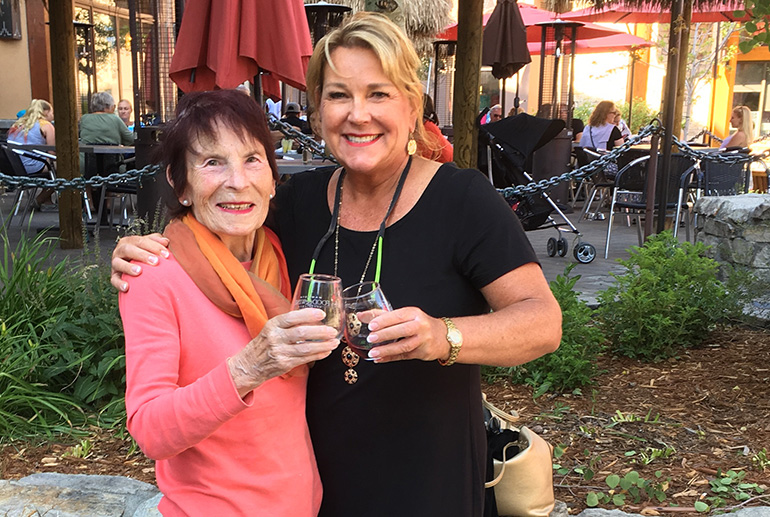 As I raised my sampling of Merlot from one of the wineries, I wondered whether a glass of red wine could really help prevent the onset of dementia? Could it possibly slow down the decline in cognition seen in neurogenerative conditions? Many scientific studies, and even Dr. Oz have proclaimed the health benefits of Resveratrol over years.

My Own Research & Findings

Being a clinical investigator myself for many years at Pacific Coast Research Center, I took on this research task with a vengeance.

After careful review of multiple studies and meta-analyses, I found the answer to be quite nebulous as well as disheartening. While Resveratrol, the polyphenol found in the skin of red grapes, can have some potential anti-oxidant and anti-inflammatory properties, the amount that one would have to drink to see any potential benefit was overwhelming – over 1,100 glasses/per day based on the Resveratrol concentration found in a 5-ounce glass of red wine.

I delved further. What had they tested showing much higher doses of Resveratrol? Such as Resveratrol supplements? Until 2016, all 6 studies I found did not allow me to draw conclusions about the therapeutic or neuroprotective potential of Resveratrol and researchers suggested that long-term exposure clinical trials using Resveratrol preparations with high bio-availability (high absorption by the body) needed to be done.

One such study recently published did exactly this. Scientists compared the overall brain function, cognitive skills, and mood in post-menopausal women over 14 weeks – one group receiving 75 mg of Resveratrol supplements twice a day versus placebo. The study was conducted at the University of Newcastle in New South Wales, Australia. Eighty postmenopausal women aged 45-85 years were randomized to receive Resveratrol or placebo and cognitive performance was analyzed at baseline and again at 14 weeks. Study conclusions found a trend of improvements in the Resveratrol group versus placebo, specifically relating to memory functions and overall cognitive performance. They postulated that this might be due to increased blood flow in the middle cerebral arteries of the brain seen on transcranial Doppler Ultrasound studies. Marginal improvements in mood states also implicated the possibility of additional benefits to quality of life in the years following menopause as well as a potential strategy for preventing premature cognitive decline during these years.

While the exact mechanism of how Resveratrol works, some theories have been proposed.

What Lies on the Horizon?

At present, existing drugs for Alzheimer’s disease only temporarily slow down the cognitive decline and they have no effect on the underlying course of the condition causing the brain damage. Studies being conducted at the Washington University in St. Louis are evaluating the possibility of an experimental blood test which would more accurately diagnose Alzheimer’s disease. Specifically, it is a blood screening test for amyloid build-up in the brain.
The recent IDEAS done at the UC San Francisco studied over 4,000 people with mild cognitive impairment or dementia. PET imaging was performed to detect the amount of amyloid plaque formation. Interestingly, only 54 percent of those with mild cognitive impairment had the plaques compared to 71 percent of those with dementia. This led to approximately 2/3 of the doctors changing their medical management for those patients with mild cognitive impairment.
Researchers are hopeful that by using the amyloid blood test, better use of PET scans will be done. So if patients test negative for the amyloid protein, they would not need to undergo a PET scan and their doctors could look for other causes for cognitive impairment.
POINTER study – this study funded with 20 million from the Alzheimer’s Association will evaluate the effects of lifestyle choices on the development of dementia, including the effect of exercise, nutritional counseling, social activities and better management of other diseases.
For those of you who may want even more information regarding the clinical trials presently ongoing on Alzheimer’s disease can visit the Alzheimers Association.


Bottom Line, What Does This All Mean For Us?

It means that there is no magic pill that can miraculously cure or prevent you from developing dementia. Most likely, dementia is a multi-factorial process which includes both genetic and environmental factors. It also means that enjoying one glass of red wine each day may help your brain, but don’t overdo it. Drinking too much alcohol can increase the risk of certain types of cancer including breast, colon and stomach cancer. For women, the daily recommended amount is one glass of wine (5 ounces) and 2 glasses for men.