You may or may not know that I am a control freak – Classic type A personality to the T. I like to micro-manage and be in charge and assuring nothing goes awry. Years ago, one person even told me I was a AAA personality type! I don’t think that I’m that bad, but maybe I am a bit biased. 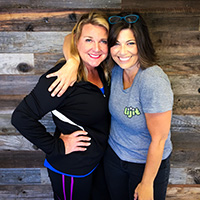 Recently, I decided to find an opportunity to give up control – let someone else take the helm, and captain my ship. I figured there is no better way than to jump out of a plane at 13,000 feet and plunge down to the ground – the ultimate in letting go! And do it with one of my awesome patients, Sugar Jones? Now that was just the icing on the proverbial cake. I delivered Sugar’s son 13 years ago and we have remained good friends since.

You may call this fashion of letting go crazy, and I’m inclined to agree with you. But I had to do it – I had to test myself to see if I could really let go. Five days after completing this feat, I’m still surprised that I did it. For those of you who have been thinking about skydiving…DO IT! For those who you who may be living vicariously through my adventures, let me share this experience with you.

Skydiving was on the top of Sugar’s bucket list. It was on mine too, but towards the bottom! We booked our tandem skydive with GoJumpOceanside for an end-of-day, late afternoon jump. I reviewed their site, read the Yelp reviews and didn’t see any deaths so it gave me some confidence that it was going to be OK to let go. Will Smith sums up “letting go” perfectly…and the irony, it was about his skydive. This is a “must watch” video…

For me and Sugar, it was a beautiful, sunny day with clear skies, and it seemed as if I could see all the way across the blue Pacific. Up to that point, I was still quite calm. OK, apparently, I wasn’t calm according to one person I was with. He said I went from control freak to “Super Control Freak,” a look of tension on my face while getting irritated with the iPad sign-in system, not understanding why Sugar was 5 minutes late in rush hour traffic, etc. Apparently, I had yet to understand what it means to let go. I signed all the waivers, paid for our jumps and videos, and then came the best part…I met my burly instructor, Brent. If you’re going to jump off plane, why not do it with a hottie? Right? I started letting go.

Brent dialed me in with my equipment and tried to keep things light. Along with another instructor and the camera flyers, they were cracking jokes and instructing me in their best Italian accents (I am fairly sure none of them were Italian!). Before I could blink twice, it was time to get on the plane. Still, in my mind, I was doing pretty well – normal heart and respiratory rates…I think. We boarded the small plane and seated ourselves on two narrow benches. Brent and the other instructors sang songs as we ascended to our destination altitude – 13,000 feet! “WOW! What a view!” I thought – just like going up in an airplane, but without the extra leg room, drinks or flight attendants rushing down the aisles.

No turning back! #yolo 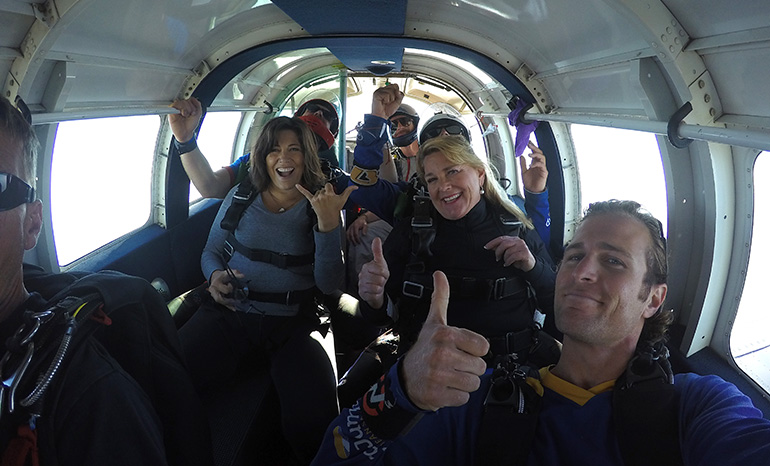 Brent then strapped me to him so we were interlocked – I couldn’t go anywhere without him – Or was it the other way around? Either way, he was now taking control of my destiny. It is a very strange feeling to put your entire life in someone else’s hands. I think I now understand what the parents of the babies I delivered felt – especially the one’s with complicated births. They put their lives in my hands, trusting me that I would get them through, safely.

Without notice, I was abruptly knocked out of my peaceful, zen-like state of mind. The door to the plane opened and a huge gust of wind hit my face. I thought to myself “Oh my god – now, this is scary!” My heart skipped a few beats as I peered out the door. My fantasy had become a reality! There was no turning back. Brent, whispered in ear, “Ok, just scoot forward”. Maybe it wasn’t a whisper, maybe he was screaming. It was a point of sensory overload. I heard what he said but didn’t want to respond to his command. “Really? Are you out of your mind? You want me to scoot off this stable bench and move calmly into the door of the plane?” Everything was happening so fast that I just complied and did what I was told. Looking down was not a good idea – all I saw were tiny dots and a huge Pacific Ocean while wind was blasting in my face. I looked at the cameraman, Ian, who was hanging out the door on the side of the airplane. He was smiling – of course, he was- he does this every day! 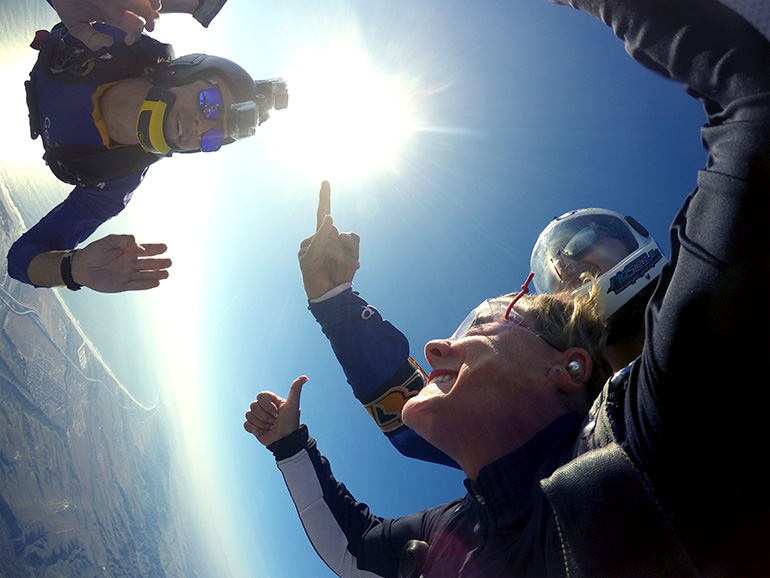 Ian gave us a thumbs-up and I knew it was time to go. Now what do I do? Well, the logical and only answer – “let go” and let Brent push us forward, releasing us into the atmosphere. With that, Brent nudged us forward as we did a backflip off the edge. “Oh my god – what am I doing? This is crazy!” Time stopped. Thoughts raced through my head and a nauseous feeling sunk in my stomach. The feeling of free-falling made me feel faint and out of control. Now my vital signs surged – heart and respiratory rate were at all-time high as adrenaline surged through my body. The memory of my last bungee jump filled my brain and I recalled how much I truly disliked plunging through the air without any gravitational pull!

“Ok, just let go and breathe.” I remembered Brent had told me to just relax. Relax?! When I’m going 120 mph through the air strapped to a stranger I just met 30 minutes ago? Yes, he seemed quite confident with his abilities when we were on the firm ground, but now I had my doubts. I remember signing pages of waivers and release of liability forms. My controlling AAA personality reared its ugly head and I felt panic. Oh my god…I just kept breathing – that helped erase some of the nausea and kept me focused. Ian was in front of us smiling and waving his hands back and forth like he was swimming. Was I supposed to do that too? But I had Brent in the back of my head telling me “Just keep your arms out and enjoy the ride.” Again, what was I doing with two mad men at 13,000 feet above the ocean…12,000 feet, 10,000 feet, 9,000…? 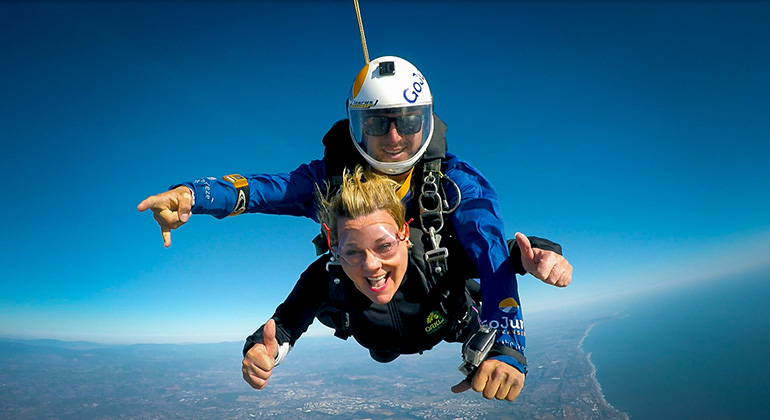 Finally, after what seemed like an eternity- which was probably only 1-minute, Brent released the parachute and the air instantly grew calmer. I could breathe more easily without feeling gusts of air distorting my cheeks and making my lips swell. Believe me, no one looks good with 120 mph gusts of wind hitting their face – except maybe Brent!!

We coasted for a few minutes, descending closer to enjoy the view of the beautiful Blue Pacific. Brent wanted to do some spins – I said ‘no, it’s okay – this is good right now”. He asked me, “Do you get car sick?“ Now, he asks me?! I said “yes”. That pretty much put an end to the spinning challenge he had hoped for us to undertake.

We continued gliding downward reveling in the incredible view. The clear skies allowed us to see miles in all directions – the ocean to the west and the flowing mountains to the east. Finally, we saw the meadow to land. OMG – it’s going to be over. Hallelujah! Part of my heart rested in relief while another was a bit saddened. Was this crazy ride really over? I lifted my legs like a chair and Brent guided us to a gentle stop as our feet landed on solid ground. What a relief!

He took off my goggles and detached himself from me. Yes! it was over! I walked up to my friends who asked how it was. I said “Awesome!”. “Would you do it again?” I immediately responded “NO!” and started laughing. Yes, it was fun – but for me once is enough for this act of faith with destiny. However, I can see Sugar pushing the limits and becoming an avid skydiver!

Afterwards, we went to a local brewery to decompress and celebrate our exhilarating feat. Brent and some of the other crew were there and we shared some laughs about the dive. Brent had done 6 jumps that day – ok, now I know he really was crazy! 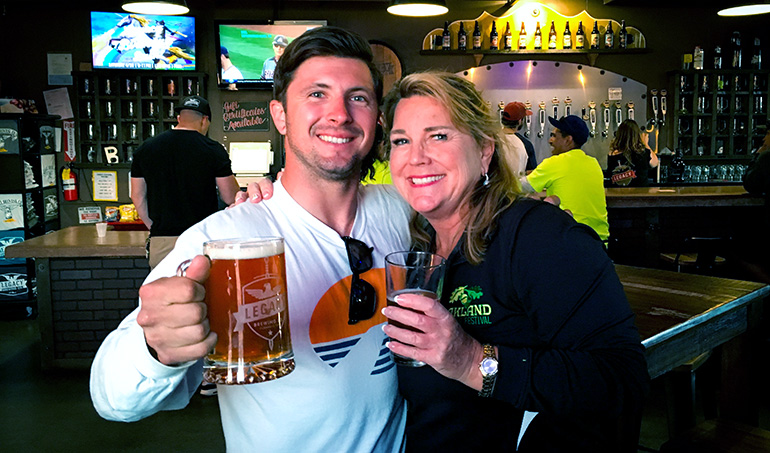 Looking back, I am proud of what I did. I tested my boundaries and forced myself beyond my comfort zone. Many of us wait for the “right time” or ideal situation to finally do something. With this experience, I realized that there is never really a “right time.” You just have to do it. Let go and have faith. Live life and know that the sky’s the limit!